Thanks to David Burton of FanAngel.com for this fantastic guest post!

Not too often is Fundraising equated with FUN. Typically it’s the necessary evil that we all cringe at and hope someone else will handle. The few amazing booster parents that step up to the plate are the unsung heroes of youth and high school sports. Well, this is for you, amazing booster parent -- to give you a little more FUN in your support activities. A few months ago, David wrote a post 21 Best Fundraising Ideas for Schools and Sports Teams that focused on the best fundraising ideas and how they could be amplified using online efforts. Since then FanAngel.com has received some more top-notch ideas. This list comes from that effort and feedback – our Top 5 Favorite FUN Fundraisers for Teams and Booster Clubs. To qualify for this list, the fundraiser had to not only be fun for the kids, but fun for the booster parent, too! Additionally, it had to be easy to setup and pull off. Nothing kills fun like a ton of work! 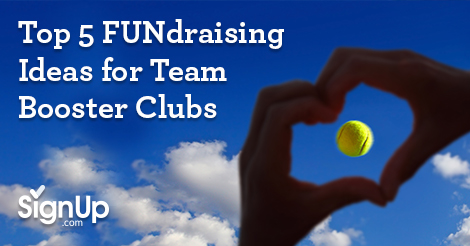 So, without further ado, here are our Top 5 FUNdraising Ideas for Teams and Booster Clubs.

1. Scavenger Hunt – Old school scavenger hunts have gained new life with the modern smartphone. Look at apps/sites like GooseChase and Klikaklu, which each take a different spin on the old stalwart.

GooseChase is primarily based on text clues. The administrator (aka Booster Parent) sets up the scavenger hunt via a website, entering the various hints – title, text, and images can be used as part of the clues.   Hunters download a mobile app and use the clues to seek out the answers, location, or whatever the hunt entails. The seekers submit their evidence via photo and text, which gets uploaded to the site in a live stream.  Setting up the hunt was extremely simple, all done from one’s desk.

Klikaklu takes a different approach by focusing on photo matching and geolocation. The technology is more advanced and has more options, but it was also much harder to setup and get working like expected. For many clues (especially the photo matching), it requires the admin to go to the photo’s location and snap the clue’s photo.

Both of these apps have free versions for small numbers of teams and players, but charge fees as the numbers grew. Check for school and non-profit pricing as they both have

Charging entry fees for each team and give prizes to winners, preferable from sponsors, is a sure fire way to have FUN while making some funds.

2. Equip the Coach – Old fashion dunking booths were once extremely popular fundraisers. The ability to punish your coach or teacher draws a crowd like no other! While you don’t see many dunking booths any more, the tradition is alive and well with fundraisers like Duct Tape the Coach to the Wall, or Shave the Coach’s Head. The “Equip the Coach” is similar, but a lot less work to setup…and the shame comes right away.

Take your selected coach to the appropriate athletic field or gym. Bring his/her team uniform and all appropriate sporting gear (helmets, pads, bats, etc.). Then take a series of photos, starting with the coach in his/her bathing suit and uniform/gear spread out nicely on the ground. The next photo has the coach with socks on, then pants, then a shirt…until they are full clothed. Then layer on appropriate equipment, either held by the coach or propped up in some way.

This series of photos is then used as a Progress Thermometer for a crowdfunding or similar fund drive.

This type of fundraiser is extremely shareable, both initially and as the coach is equipped. Make sure to post often on social media, but also reach out to newspapers, TV, radio, and newsletters, as the “shame” photo is a great hook.

This works best for fundraisers for uniforms and equipment. Focusing the series of photos around WHAT the funds will be used on creates context for the donors that greatly increases conversion.

3. Tennis Ball Toss – This fundraiser is great for sporting events that have a natural breaks (half-time, long inning breaks) AND a group of volunteer shaggers (volunteers, cheerleaders, etc.) to pick up the balls quickly.

For this fundraiser all you need is a clipboard with sign-up sheet, some sort of target (e.g. a 5 gallon paint bucket, trashcan, or hula hoop) and a bunch of tennis balls, each with a unique number drawn on them with a sharpie.

Sell tennis balls at a booster booth for $2 each or 3 for $5. Use the clipboard/sign-up sheet to collect the donor’s name and tennis ball number for each they purchase.

At the appropriate game break, pull out your target and have the announcer ask all of those who purchased tennis balls to throw for the target. Give them only 1-2 minutes to throw all their balls.

Include a prize for the first or all balls that make it into the target. A gift card to a local tennis store, local restaurants, or free team gear are great and easy options.

4. Whipped Cream Bubble Gum Race – A pie in the face is always good for a laugh, so what about 10 or 20 pies of whipped cream?

This fundraiser works best in conjunction with a spaghetti feed or similar event night. Gather up coaches, teachers, athletes, and/or students as the volunteer racers. For each racer, have a coffee can (preferable decorated) with a slit top for accepting raffle tickets. Then sell raffle tickets to patrons at $2 each, 3 for $5. Each patron then places their ticket(s) in the racer(s) coffee can of their choice.

At the designated time, gather your racers. Setup the pies by setting a single piece of bubble gum in the tin and then fill with whipped cream. The objective for the racer is to, without using their hands, dig their face into the whipped cream and find the bubble gum, then chew and blow a bubble. The first racer to blow a “legitimate” bubble is the winner. Start the event with a Ready, Set, Go and have volunteers watching all racers for the first bubble.

Pull one ticket from the coffee can associated with the winning racer. Then award a prize to the raffle winner. Remember to take a picture of the raffle winner with the racer (face still covered in whipped cream is best).

5. Flock of Flamingos – This fundraiser is appropriate for High School teams and clubs (and perhaps Middle School). Harkening back to the days of toilet papering houses, this fundraiser is easier to clean up and won’t stick to your car’s paint job.

Purchase a slew of plastic pink flamingos from Home Depot (check online for best prices) or the Dollar Store (sometimes available in early summer). Buy 10-12 at a minimum, consider 20+ flamingos -- It’s a Flock after all.

Use a crowdfunding page or paper fliers to take donations ($10-20 is common) that will send the flock to an unsuspecting, but friendly, yard. Include a lawn sign of Thanks, which should also include the ability (URL or phone number) to quickly “Flock It Forward”, which immediately shoos the flock to the next yard (or be removed). Otherwise, the flock sticks around for a few extra days.

These fundraisers are awesome for cracking a laugh. What could be better!

David Burton is the co-founder of FanAngel.com, an online fundraising platform specializing in school and sports fundraising. FanAngel differentiates itself by pairing your fundraiser with an online assistant to help in any way imaginable.